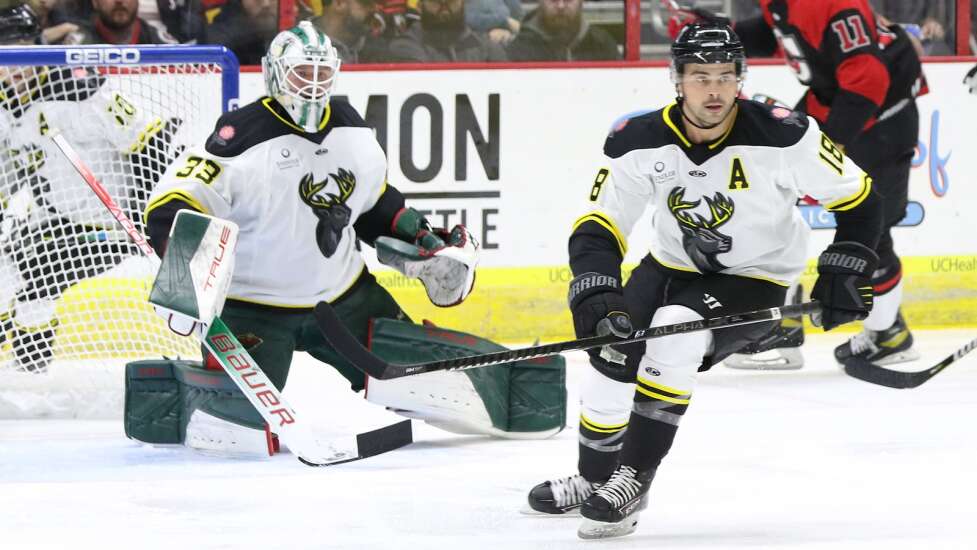 CEDAR RAPIDS — The first thing on Trevin Kozlowski’s agenda after this weekend is paperwork.

The Iowa Heartlanders goaltender is a West Point graduate who was cleared to pursue professional hockey this season and deferred his post-graduation military commitment for five years under a Department of Defense directive .

The Heartlanders season ends Saturday night. Once the team is back in town, Kozlowski will put together something of a portfolio to show that this DOD directive allowing military academy graduates to play professional sports is a good thing.

“I just take different press articles or photos of things I’ve done for the military to try to promote them,” Kozlowski said. “That it’s a good way to show them that, hey, even though I play professional hockey, I’m not currently on active duty, I still promote the military, talk to people and tell them knowing that the option of serving your country and playing professional sports is a real possibility and that it works for both worlds.

“I am very lucky to be in this position. If at the end of the day they say, hey, we gave you a year and we’ll call you back, I’m totally fine with that. I am honored to serve my country when the time comes.

Kozlowski received the 2021-22 Community Service Award from the ECHL on Friday. The 24-year-old helped create a program called “Trevin’s Tickets,” in which he donated two tickets to each of Iowa’s home games to a current or former military member.

He has also worked with the Iowa City VA Medical Center and local nonprofit Salute to the Fallen, whose mission is to “raise awareness and provide financial assistance to multiple military causes, including Gold Star families.” , veteran suicide, PTSD, homelessness and more,” according to a statement from the Heartlanders.

“It’s very special to me,” he said. “It certainly wouldn’t be possible without (Head Coach) Gerry Fleming and (Team President) Mr (Brian) McKenna and all the people who work in the front office, Jordan Cue in particular, our community relations.

“I’ve always wanted to do something to help current military or veterans, something like that, given my background. Jordan and I got together and kind of reflected a bit, and that’s what we landed.

Kozlowski signed a one-year contract with the Iowa Wild of the American Hockey League last offseason. That deal obviously expires after this weekend, and the California native said he has no immediate plans for next season, if he is allowed to have one.

“It’s my first season as a professional and I’ve learned a lot,” he said. “I’m not too sure. I’ll just take it as it comes. Do my best to try to end on a positive note. Keep working hard and be a good teammate, then whatever happens to me, comes to me.

First published in the April 21 print issue of Outlook Valley Sunshine. Recipients of the annual Les Tupper Award will be honored by the La Cañada Flintridge Coordinating Board on Monday, April 25, with the awards presented at Flintridge Prep’s Norris Auditorium at 7 p.m.The free event is open to the public and will recognize […]

Places pre and post COVID-19 community initiatives as a key driver of brand improvement NEW DELHI: Since its inception in 2018 and even before launching its first product in India, MG Motor has started working for the community. As one of the most famous automotive brands in the world, MG has established its presence in […]

Healing retreats with canoe trips A Vancouver halfway house program rooted in Indigenous cultural practice commemorated in a documentary filmed in British Columbia Indigenous peoples represent 5% of the total population in Canada, but the representation of the federal incarnation is reaching new historic heights exceeding 30%. —Merv Thomas, CEO VANCOUVER, BC, CANADA, May 11, […]