Photo by Shari Harris
New Board Member Heidi Moloney recites her oath of office under the direction of Board Secretary Jeremy Rinne. 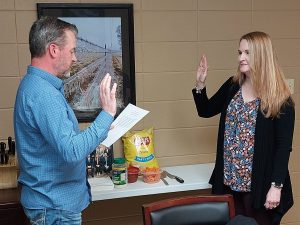 The Licking R-VIII School Board met on Monday, April 11 at the Superintendent’s office. Members of council, including newly elected members, and trustees were present, as well as the secretary of council and members of the public.

The board voted to approve the minutes of the previous meeting and to approve the payment of invoices. Supt. Wright reviewed the bills with the Council before the vote. High school library chairs, a $6,500 bus repair and antifreeze for the elementary school’s HVAC system were among the expenses for the month.

Public comment was put on the agenda and Ms. Linda Roberts addressed the Board regarding the Missouri Retired Teachers Association (MRTA). The membership of the organization consists of retired teachers and school staff, and it is the pension fund watchdog for all retired school staff. On behalf of MRTA, Ms. Roberts requested that the school board join 50 other districts in the state and pay MRTA dues of $44 for the first year for all retiring teachers and school staff.

Mr. Gorman read the election results and the board approved the results. Board Secretary Jeremy Rinne led new members Ashli ​​Todaro and Heidi Moloney through the swearing-in process.

The agenda item “Uncertified Letters of Intent and Additional Assignments” was moved to closed session.

The Board approved coverage for the 5.7% increase in MET insurance rates for the 2022-2023 school year, added an HSA option, and eliminated Plan 4 from the proposed options.

Renewal of Student Athlete Concussion Insurance through the MSHSAA was approved by the Board of Directors at an annual cost of $211.95.

Supt. Wright announced that the Seamless Summer program, which allowed the district to provide free lunches to all students, will only extend through the end of summer school. In addition, the state demands an increase in meal prices. Beginning with the start of the fall semester, student breakfasts will remain at $1.25, but student lunches will be $2.42 and adult lunches will be $4.15. Families are still eligible for free or reduced lunches and will need to submit the Free and Reduced Lunch Form to determine eligibility. The Life 360 ​​program will be in place for 2022-23 and will provide a free afternoon meal to any student.

The board approved MSBA Policy Update 22A, which addressed policies on lactation support, short-term leaves, corporal punishment, seclusion and restraint.

Council voted to announce bids to resurface the car park. Final decisions on what will be resurfaced will be made when the Board decides whether the capital projects tentatively planned with ESSER III funds will be possible.

Supt. Cristina Wright provided the following information regarding completed business during the remainder of the meeting.

“The Board thanked Ms. Hawn, Ms. Buehlmann, Ms. King, Ms. French, Ms. (Hoemann) Daniels and Ms. Bonnie Beasley for their service to the District and wished each employee all the best in their new ventures.

“Ms. Tillery has been approved as the first member of the District’s Leadership Academy.

“Council has reviewed the structural engineer’s report on the damage to the secondary school gymnasium building.

“Council discussed hosting a community meeting to gather public input on the ARP/ESSER III plans. This meeting will take place on April 21 at the FEMA Gym at 7 p.m.

“The board discussed hosting a stakeholder night next year to raise awareness about district programs, financial challenges and student celebrations.

“Finally, the MO Post-Secondary Council Initiative grant submission has been approved by the Board of Trustees.”

Community members examine aerial maps of Princeton. Photo: Princeton Future. Princeton Future, a local nonprofit that promotes community engagement in the city’s planning process, will host a “Listening Meeting” on Saturday, September 17 from 9 a.m. to noon at Princeton United Methodist Church in downtown Princeton. The meeting, free and open to the public, follows […]

TUCSON, Ariz. (KOLD News 13) — On Tuesday evening, more than 100 people attended a community meeting to voice concerns about a proposed luxury RV park in Picture Rocks. The 75-acre property is less than a mile from Saguaro National Park, making it an attractive location for visitors. It would include 200 RV sites, a […]